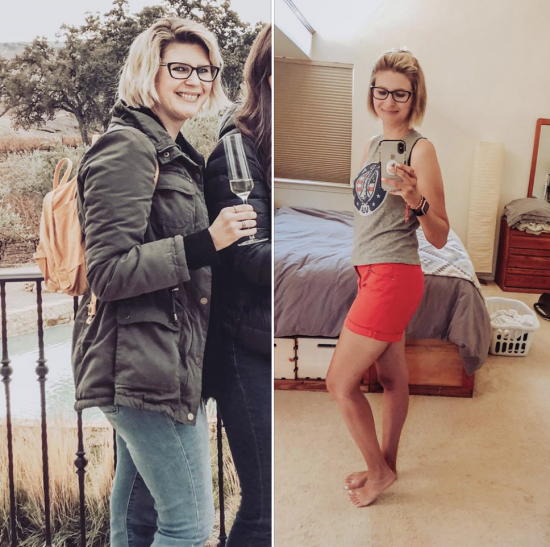 Spoiler alert: I’ve been on the Keto diet for two months.  And here’s why.

The short version is on the Keto diet, I’ve lost 15lbs. The long version is, for me, there’s a lot more to it than that 😉.

A little backstory: I’m gluten-free for autoimmune stuff, but I don’t diet. I’ve never liked diet soda or light, low-cal anything. I do love the gym …  but I can’t go often bc kids.  Honestly, I feel like I’m just an average girl weight-wise and I’m OK with that.

But all that changed when I stopped breastfeeding Wyatt on his third birthday (🙌🏻) in December 2018.  After that, my body went haywire. It was also the first time I wasn’t breastfeeding or pregnant since 2013. Being a baby-makin or feeding machine amped up my metabolism like wildfire. I was one of those lucky people whose baby weight was gone three months after birth. I know, I know. You hate me. But that’s how it was. I could eat ice cream and drink wine and all the things and didn’t gain much.

But when I stopped breastfeeding, I also got my period back (yeah part of my cray is it disappeared for almost FOUR years) – my hormones went all sorts of wack. I kept eating the same way I did before and when I stood on the scale, my weight shot up from about 125 to 150 pounds in a matter of months.

None of my clothes fit, I was wearing a size 10 or 12 for the first time in my life, my face looked puffy, I didn’t feel well.

Keto is a short term, super low carb way of eating. You cut out things like sugar, fruit + bread/grains and it chemically changes the way your body burns fuel. It takes about three days to change and it’s important to drink tons of water.

But it doesn’t involve pills or supplements or even a fitness plan. Oe, at least mine doesn’t. And, again, it’s short term. I’m doing mine from July to November. You’re not supposed to do it for life.

There’s actually a lot of science behind Keto. The crux of it is instead of eating and burning carbs for energy, you cut those out and your body burns fat instead.

For me, and others I’ve heard, the results are crazy good. The fat literally just disappears. You also see immediate results on the scale, which is so encouraging.

Since this process involves changing how your liver works, the diet attracts controversy. So if you have pre-existing health stuff, check with your doctor.

If you eat sugar or go over on carbs, your body will kick you out of ketosis and go back to burning carbs for fuel the regular way. So there’s some food label tracking and math involved to stay in the ketosis state of fat burning.

I suck at that math stuff, so I’m using the free Carb Manager app where I literally just scan food labels into my phone, tap my serving size, and the app does all the tracking math for me.

In February, my longtime friend Jilaa was telling me all about her own keto journey. I had only heard about “keto” from magazine covers at the grocery store. When we went to dinner, I saw how similar it was to being gluten-free. 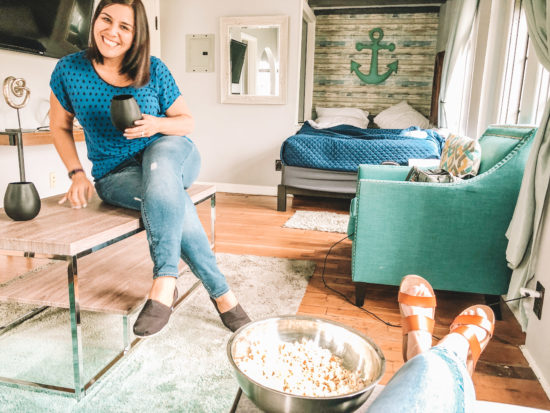 I was pretty skeptical about “going on a diet” myself, but over the next five months, I watched her in awe as Jilaa completely transformed her body with exercise and this keto thing. ( you can watch her story as https://instagram.com/keto.otf.wifeandmomma over on insta).

I still held off tho bc I was SUPER sad to give up wine. Isn’t that a stupid reason 🤣. But then at the fair I tried a spiked seltzer 🧡, which is totally acceptable on keto. So in July, I finally gave keto a try. My hubs did, too. But I won’t share his story, bc that’s his to tell.

The first week was rough – I was dizzy, had weird abdominal pains that radiated up to my shoulder that landed me in urgent care, and I craved chocolate like no joke. But after texting Jilaa like crazy, she said just try to go for two weeks + drink more water — bc your body is changing and you need to get out of the transition period. So then I went out and bought liters of bottled water to make sure I drank them, and sure enough, I started to feel better.

Then I started to feel REALLY good. I almost immediately dropped six pounds the first week, which was so rewarding to see immediate change when trying out something new. Since then, I bought new clothes, my face isn’t as puffy, my periods are lighter, I don’t have heartburn all the time, I’m not bloated, and I have more energy which is a huge thing for me as a mom.

When I started Keto on  July 1, I weighed about 145 and today I weigh about 130. So from July 1 to Sept. 9, I’ve lost about 15 lbs. I’ve gone down TWO pants sizes, went from a size large to a small in tops and feel like I can even wear tank tops again. I also strutted my bathing suit booty ALL over Ravine this summer as their family blogger 😂.

From the start, I probably had it a little easier bc I was gluten-free anyway. Most of the processed products made to be gluten-free are gross. There are some exceptions, sure, but that’s just the plain truth 😅.

I might actually give up a limb to taste a dough-y hole in the wall donut place glazed twist again or pizza crust that’s tall and soft. So, giving up those cardboard grains to go keto wasn’t really toooo hard.

And now I’m eating full-fat cheesecake (with almond flour) for breakfast and still losing weight. 😊. We are all using Green Chef delivered meals, hard-boiled eggs as a staple, avocado, tons of cheese and yes, I even like kale now 🤪.

So that’s my Keto 411. If you have any questions please ask and I’m happy to answer. If you don’t agree with this diet stuff, or want to comment on the cons of keto, I’ve read them. As always, to me or anyone, just remember that bloggers are real too. Be kind and realize everyone has their own “stuff”, their own journeys and we are all different.