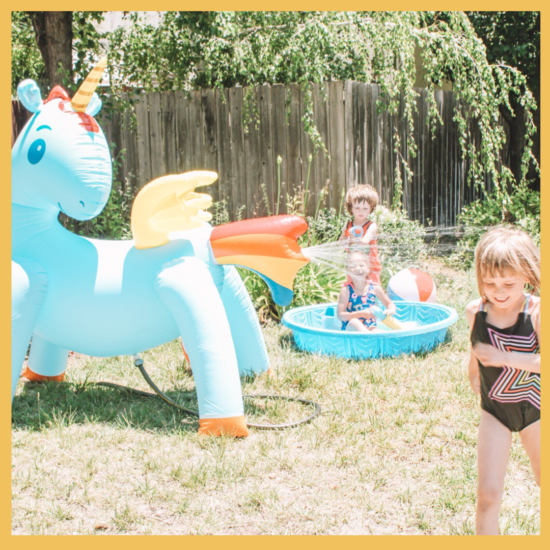 JumpOff Jo‘s 5-foot inflatable Unicorn Lawn Sprinkler is easy to assemble and it totally looks like water is coming out of its butt 😅. Which the kids think is hilarious.

And, I gotta say … The ease of this playdate was NOT lost on me. I know this because this is my mom truth:

It was June 2016; Wyatt was 6 months old and Clara was 2.5 years old. To do a kiddie pool day, I had try to somehow occupy Clara while I set it up, haul Wyatt’s infant jumperoo outside, put him in it, hustle my buns to lug the heavy hose across the yard, fill up the play pool with the hose in one arm and a now screaming Wyatt in the other, put Clara in the pool, try to sit for four seconds … voila! Easy backyard pool fun!! 🤪. NOPE.
Anyway, this unicorn is actually easy. I could even put it together and inflate it. I only messed it up once 😂 Highly recommended tho!! It’s $39.99 in my #AmazonInfluencer Shop (affiliate link).
Add a Comment
Share