This article originally appeared in the June 1, 2018 edition of Paso Magazine 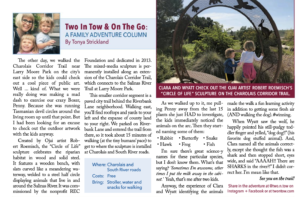 The other day, we walked the Charolais Corridor Trail near Larry Moore Park on the city’s east side so the kids could check out a cool piece of public art. Well … Kind of. What we were really doing was making a mad dash to exercise our crazy Boxer, Penny. Because she was running Tasmanian devil circles around the living room up until that point. But – I had been looking for an excuse to check out the outdoor artwork with the kids anyway. 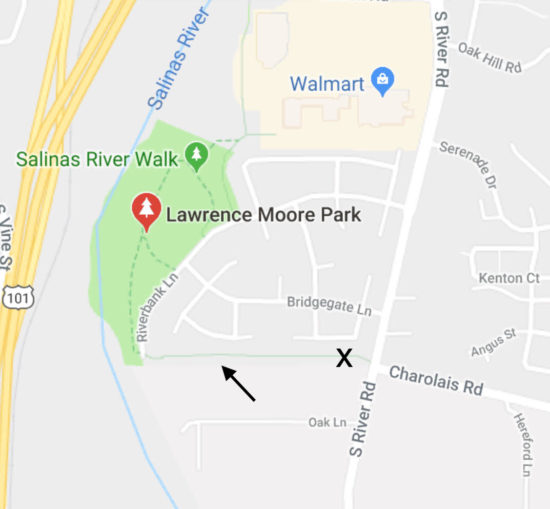 Created by Ojai artist Robert Roemisch, the “Circle of Life” sculpture celebrates the riparian habitat in wood and solid steel. It features a wooden bench, with slats curved like a meandering waterway, welded to a steel half circle displaying animals that live in and around the Salinas River. It was commissioned by the nonprofit REC Foundation and dedicated in 2013. The mixed-media sculpture is permanently installed along an extension of the Charolais Corridor Trail, which connects to the Salinas River Trail at Larry Moore Park.

This smaller corridor segment is a paved city trail behind the Riverbank Lane neighborhood. Walking east, you’ll find rooftops and yards to your left and the expanse of county land to your right. We parked on Riverbank Lane and entered the trail from there, so it took about 15 minutes of walking (at the tiny humans’ pace) to get to where the sculpture is installed at Charolais and South River roads. 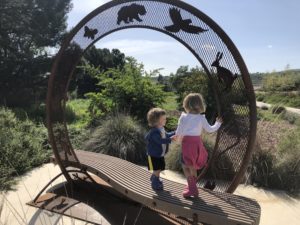 As we walked up to it, me pulling Penny away from the last 15 plants she just HAD to investigate, the kids immediately noticed the animals on the arc. Then they started naming some of them:

I’m sure there’s great science-y names for these particular species, but I don’t know them. What’s that saying? ‘Sometimes I’m awesome, other times I put the milk away in the cabinet.’  Yeah, that’s me after two kids.

Anyway, the experience of Clara and Wyatt identifying the animals made the walk a fun learning activity in addition to getting some fresh air (AND walking the dog). #winning.

When Wyatt saw the wolf, he happily pointed his still-pudgy toddler finger and yelled “dog dog!!” (his favorite dog stuffed animal). And, Clara named all the animals correctly, except she thought the fish was a shark and then stopped short – eyes wide – and said “AAAAH!! There are SHARKS in the river?!”

See you on the trail!