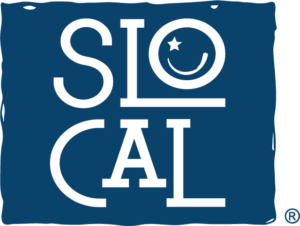 This article was first published as part of my SLO County Tourism Ambassador role. I was one of five storytellers who regularly reported on local tourism attractions for the organization. 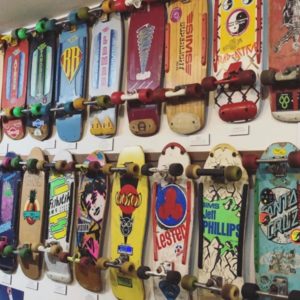 On my first visit to the Morro Bay Skateboard Museum, I went in knowing basically nothing about the sport. Afterward, I left enchanted with wooden boards, skating legends, and a newfound longing to run home and google all the lingo.

Plus, the kids and I got to pose on top of the world’s second-largest skateboard!

The next time you take the family to SLOCAL’s scenic North Coast, make sure to pop into 699 Embarcaderoto be regaled with stories of the good ‘ol days at the Morro Bay Skateboard Museum. 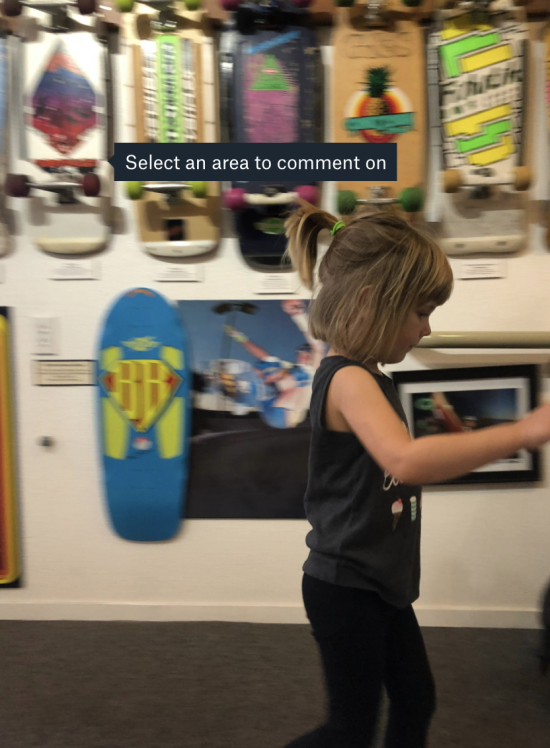 With more than 500 pieces of memorabilia (and 200 boards) displayed, I easily spent an hour admiring the photographs, sleek decks, and wheels adorning the museum’s walls, shelves, and ceiling. The collection concentrates from the 1950s to the early 90s. It spans an era of earnest beginnings with a handmade two-by-four plank with steel wheels from 1959 to more modern-day rides decked out in bold colors and edgy graphics.
It’s here, in a small but welcoming space among the Embarcadero’s quaint oceanfront shops, where you’ll also earn the chance to hop onto the 12-foot deck of the world’s second-largest skateboard.
My 2- and 4-year-olds really loved that part. And, hey. I did, too.

On my second visit to the museum, I decided to bring my small children. But… I was feeling pretty hesitant about it. I was nervous they’d knock over or break all the things. But then my 4-year-old daughter looked so sweet as she ran her little hand over the tops of the skateboard decks as she walked alongside them. She was memorized by their colors and shapes. Eric, one of the museum’s two main dudes, was kind and encouraged her to spin the skateboard wheels and explore the showroom! 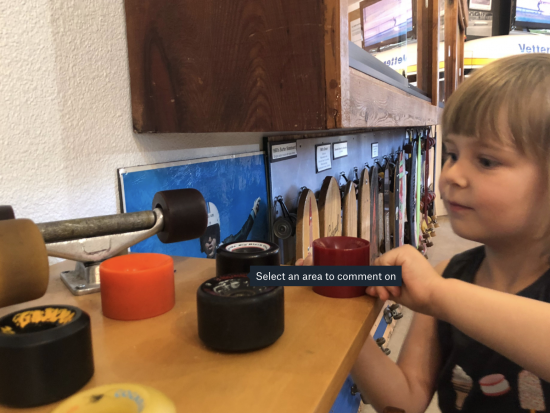 And luckily, for my sanity, all the single wheels on display that looked like they could be chucked across the room like hockey pucks physically adhered to the shelves. Whew! Those museum dudes, they’re so smart.
Keeping an even closer eye on my 2-year-old son, I finally unbuckled him from the stroller so he could climb up on the giant skateboard with his big sis. And when they were done, his sister showed him the colors on the boards, asking him which was blue and which was red, and so on. And that was really cute to watch. 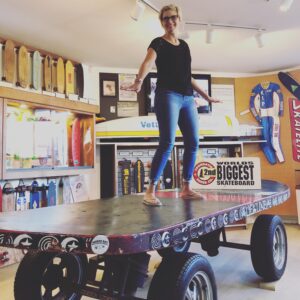 The museum dudes will be the first to tell you that skateboarding, and even the history of it, is about having fun. So being there with the kids was a good reminder for me to let go a little.

getting to know the people 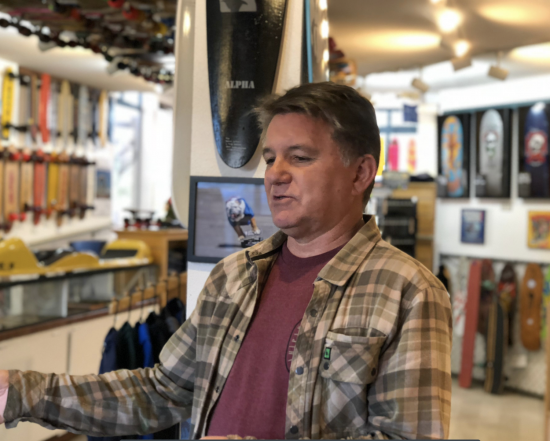 He’s a pioneer in the skateboarding realm who founded the museum in 2012. Still looking cool in sneakers and an open flannel shirt at age 61, Jack delights in giving guests the full, unedited account of the skateboarding industry’s rich history. We’re talking fact-filled stories ranging from the sport’s origins to the eye-opening assortment of boards designed, crafted and modified through the decades. But you’ll also get the personal stories — which and Jack recalls with such a warmth that you’ll soon feel like his longtime friend.

Make sure to ask Jack about the time he and his buddies were 19 years old and lamenting about getting summer jobs in 1976. It was then, on a whim, that the friends decided to skateboard across America. That right, across …. the country. On skateboards!!
And it’s Jack’s first cross-country board was a Proline model made up of Plexiglas, urethane, and metal. It’s now part of official American history at the Smithsonian Institution. 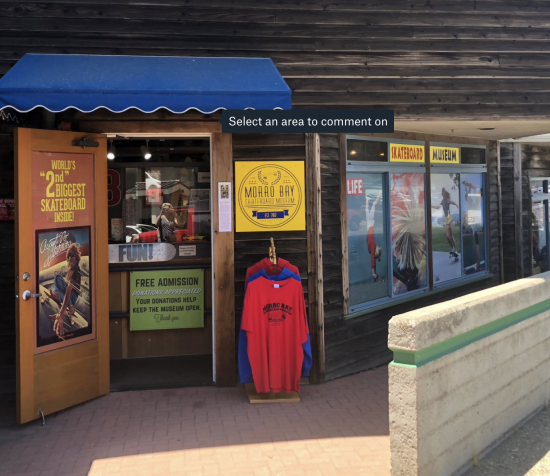 Ask Jack a few more questions (he’ll happily oblige) and you’ll also hear all about one of his favorite boards: Beatles music legend John Lennon’s 1964 Super Surfer Skateboard that he bought and tried out while on tour. If you stay long enough, you might even hear the serendipitous story behind how Jack got it. Admission is free, but a suggested $5 cash donation is accepted at the nonprofit museum. For more information, visit www.mbskate.com.
Update: The museum closed in summer 2020, according to this announcement. 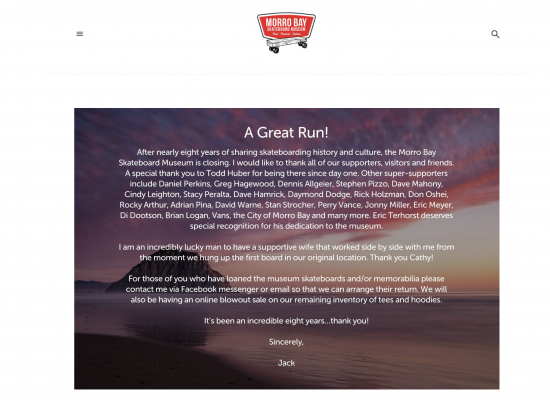