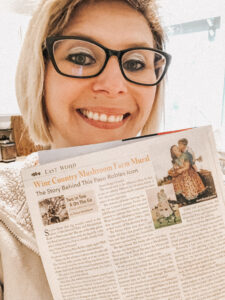 You know that big wooden mural at the corner of Beechwood Drive and Meadowlark Road on Paso’s east side? The one of the little girl in the floral farmhouse dress with the big frilly collar who’s sitting next to a boy in overalls, sweetly holding a bouquet of flowers?

Such a charming Paso Robles staple, right? Well, Facebook helped me unveil the story behind it for the magazines and for the Paso Press!

Here’s how it happened …

Turns out, the art piece is about two decades old. The darling little country kids in it are actual real-life people and the whole thing was done to celebrate their small family-owned mushroom farm. You guys!! I’m nerding out over here. I’m such a sucker for a good throwback. 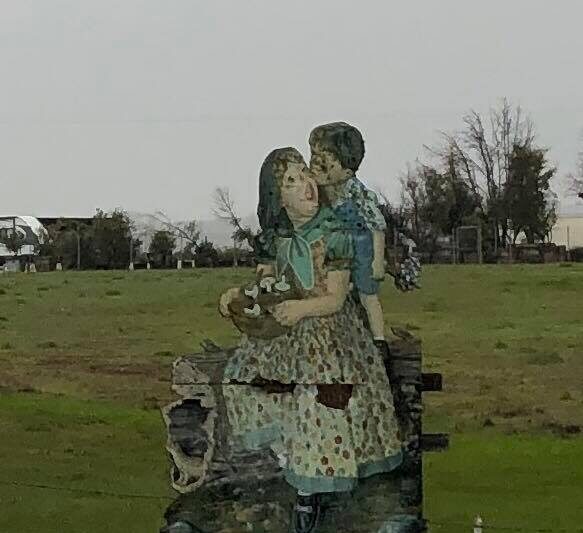 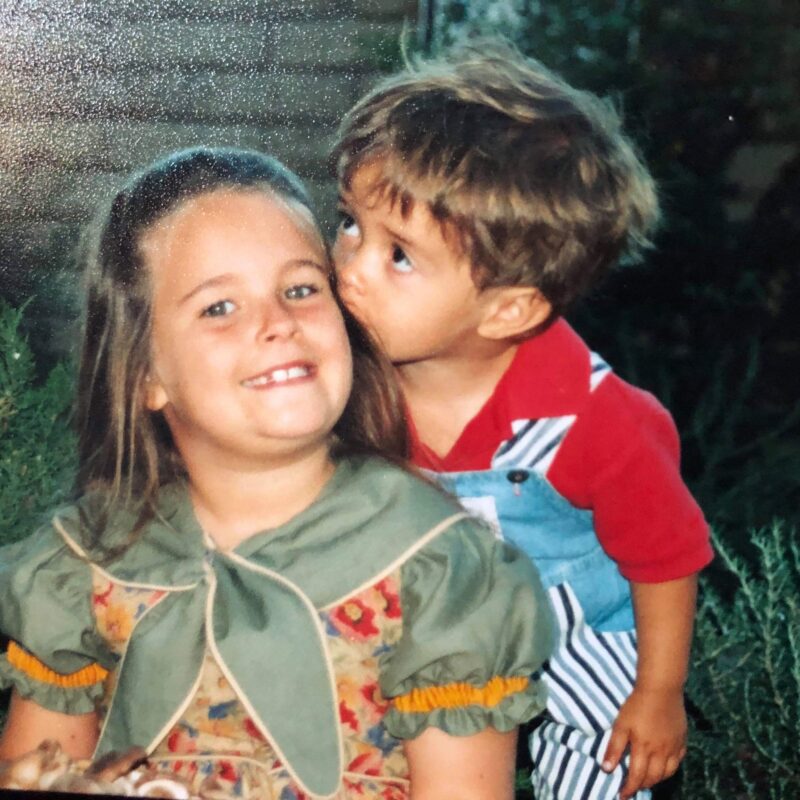 This whole history lesson started with just another ho-hum school pickup sesh at Virginia Peterson Elementary School. Instead of hopping in the car after buckling the kids, I walked over to the mural I always wondered about to grab a few pics of it for my Instagram page. (#doitforthegram).

All of a sudden, my mama friend, the lovely Danielle Ransford, saw me from across the street and was like, “Hey, Tonya! I know that girl!”

My ears perked up while Danielle told me the story: the girl depicted the mural is one of her childhood friends! And, as I came to find out later on Facebook, she’s the now 29-year-old Haley Hoops-Petrovich. And the adorbs little boy next to her is her little brother, Conner Hoops, 23. The pair now live in Atascadero and Colorado Springs, respectively.
Exciting, right?!

Courtesy pics of the photoshoot inspo for the mural in 1998! 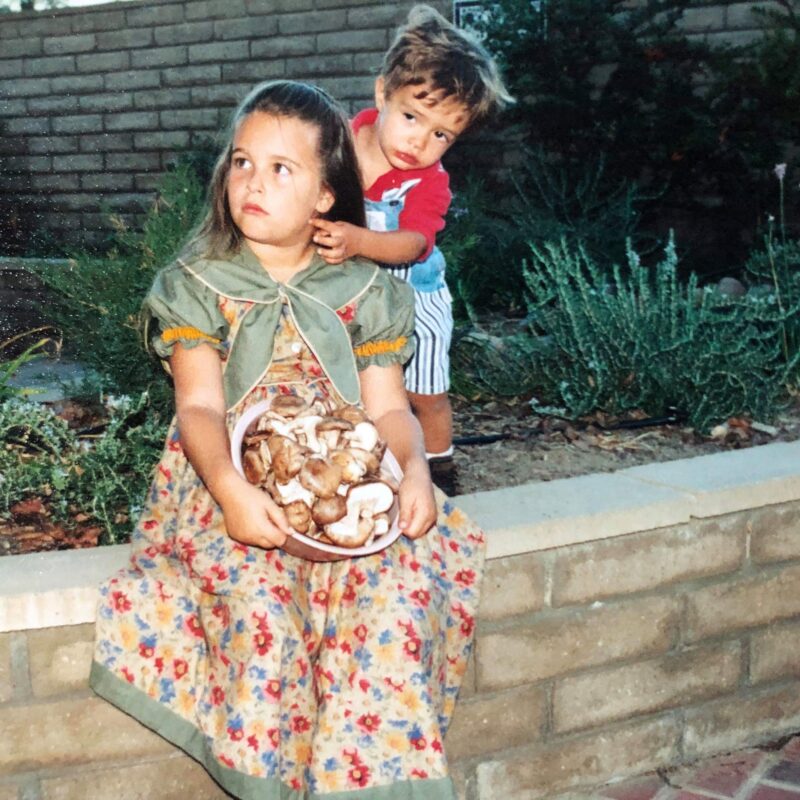 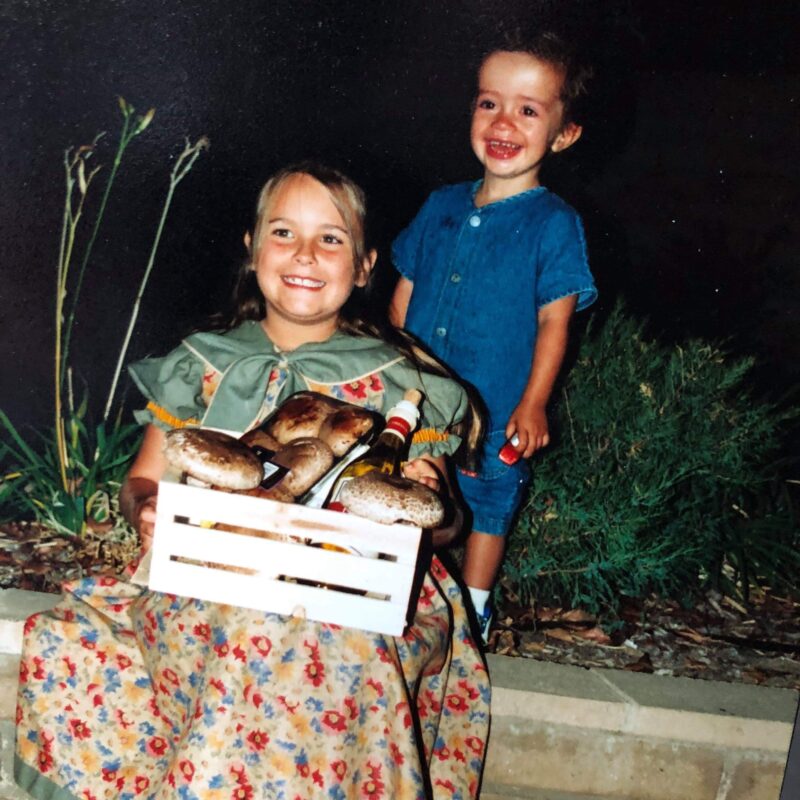 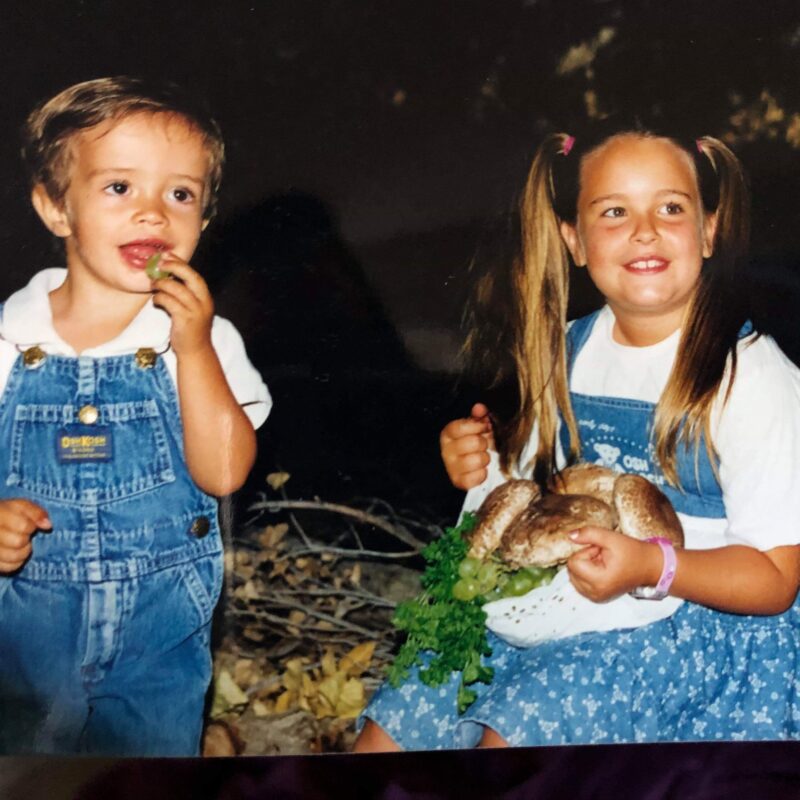 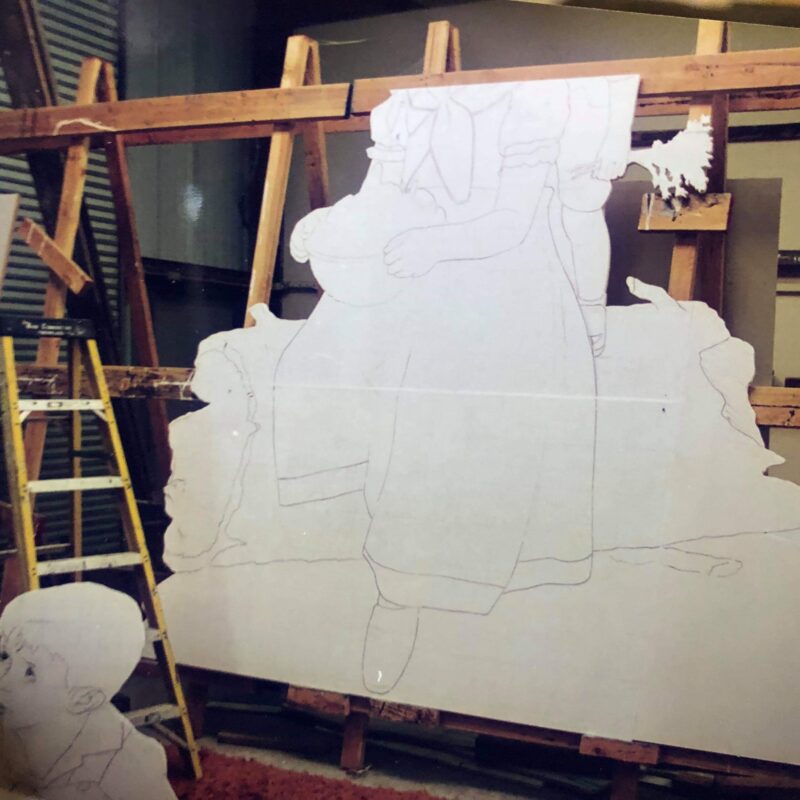 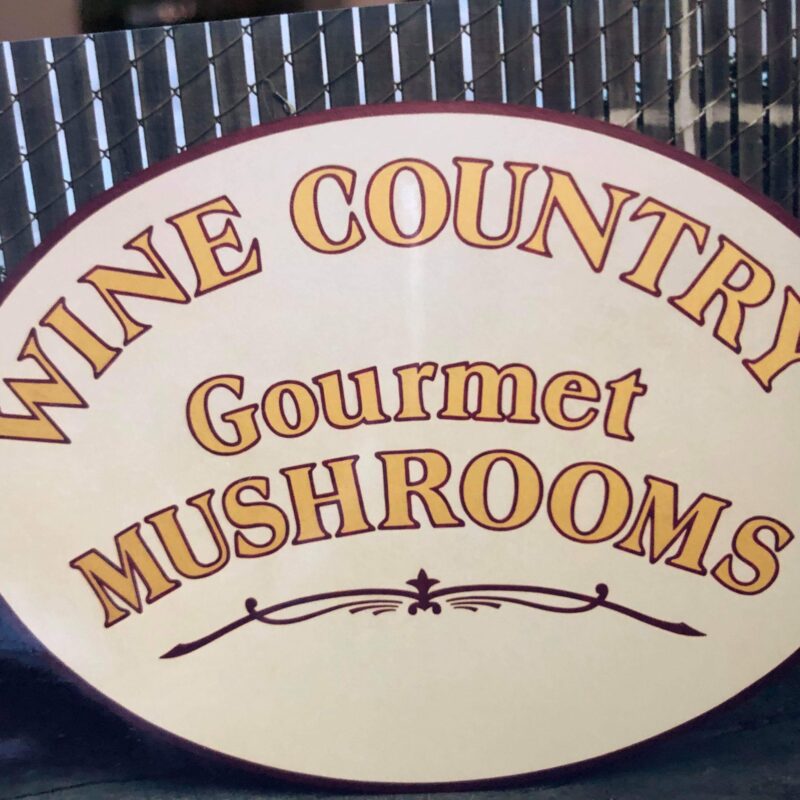 ▶ The mural used to be different colors. In fact, it was an entirely different set of colors before it was exposed to the elements. For example, her dress wasn’t always light blue.

▶ The artwork celebrates farming. Haley and Conner’s parents, Pennie and Jeff Hoops, commissioned the oversized portrait to celebrate their family-owned Wine Country Mushroom farm, which they operated from about 1998 to 2002 at their home off Meadowlark Road.

▶ The Hoops babies were about 7 and 3 years old when they posed for the picture, and their country-kid illustrations have been representing Paso ever since.

▶ The sign moved. The family tells me that when the sign was first posted, it stood at Meadowlark Road near Oriole Road. But when the Hoops sold their property in 2005, the new owner moved the sign further west to where it stands today.

▶ It was painted by a famous artist. Artist John Cerney is the man behind the mural. That’s the same guy who paints the oversized slice-of-life portraits celebrating California’s farming culture motorists pass on their way through Monterey County (and elsewhere across the country).

▶ The little girl in the poster is on Facebook! After the pictures were posted to my Instagram and Facebook, someone tagged Haley in the post … and she replied! Ahhh! The painting girl was replying to MY post. The story behind the mural was literally unfolding with each new commenter to my very own Two In Tow Facebook page. SO COOL.

▶ Turns out, the Hoops family did, indeed, sell their hearty shiitake and oyster mushrooms in fresh bunches at the local farmer’s market. Haley told me she recalled going to the farmers market with her parents to sell the mushrooms until the farm operation closed a few years later because it was too expensive to keep up. Later, the family would host a pumpkin patch instead. 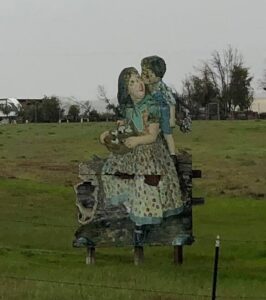 Faded and weather-worn, this painting has become quintessential Paso — and I just love it. And I’m not the only one. Soon, my Facebook thread was filled with others’ memories of the farm, one of which was someone with a Girl Scouts troop visiting the farm when it had pumpkins and another who recalled eating fresh mushrooms from the Hoops’ greenhouse.

Personally, I had never noticed the basket of mushrooms in the painting or the mushrooms growing on the ground beneath Haley’s shiny black dress shoes. Or, that she and her brother are next to an old log with cutest little critter standing in it. The painting is super detailed once you take a closer look. And I totally suggest you do.

But the story doesn’t end there. What’s even better is Haley said she’d love to see something memorable happen to the mural. In her own words: “I recently asked the people who owned the land if I could have it. They said I could but I wouldn’t know what to do with it! I know it’s beyond repair, I called the artist and he said it’s not salvageable. I might try and get a nice print done and have someone finish the background and give it to my parents as a gift. Weird to think I’m part of history.

I’d love to see something come of this actual wood-and-paint mural, not just a print of it. A restoration project for Pioneer Museum, perhaps? I’d love to hear your ideas. Email twotowgo@gmail.com.

You can read the FULL STORY in Paso Robles Magazine the Paso Press.