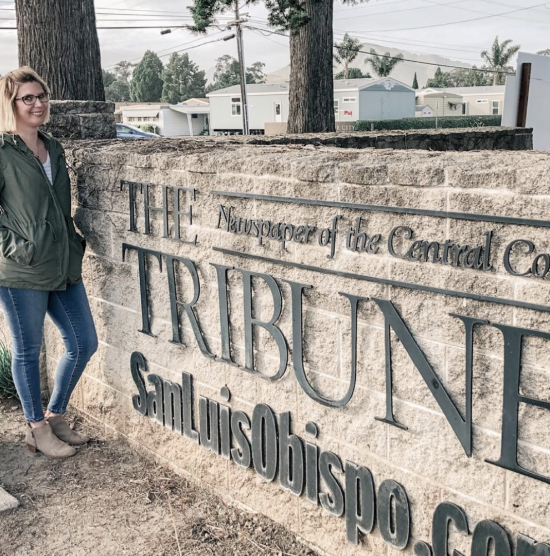 For a long time, much of my identity was wrapped up in this daily newspaper. I left it in 2015 and parted ways officially two years later. But it’s one of those places you never truly leave.

Last night, a group of us said goodbye to our newsroom building that was quite literally our second home. The offices are moving to another, smaller location in town. I don’t have all the stats, but I think the newsroom had something like 200 employees at one point and now there’s 30. This is the reality of our times.

But this building, it was so much more than just a place that held employees. It’s the place of late nights and daily deadlines and the oddly comforting buzz of the police scanner.

The place of election nights (with pizza) and compiling stories of tragedy and community and inspiration. The place of good friends, delightfully weird friends (us journalists are pretty kooky), and just sh*t tons of coffee.

Lunch breaks at Trader’s, morning walks to Starbucks and freakouts over mice, crickets and yes even a bat among us.

The Tribune had been in this custom-designed building for 25 years. I was there 12 of those years and they will always be with me.

Sources sharing stories: confiding in us, yelling at us. Finding the right words night after night to tell stories truthfully and in interesting ways. Getting caught up in the tragedies of breaking news, sitting in hard plastic city council chairs till 2 a.m. and triple checking the spelling of people’s names (they hate that).

It was sad saying goodbye to this building. Again. But even more so, to accept change. The finality of it. But what’s not sad is the never-changing truth that journalists work their butts off for their readers. They care. Like, really really care. And everyone should support their local newspaper. I still do.

Tonya Strickland is an award-winning journalist and Instagram influencer in the family and travel niche. A former Tribune news reporter, Tonya shares unfiltered #momlife content about places to go with kids. Her family moved from California's Central Coast to Washington state in August 2020. Their adventures now continue in the Pacific Northwest. View all posts by Tonya Strickland