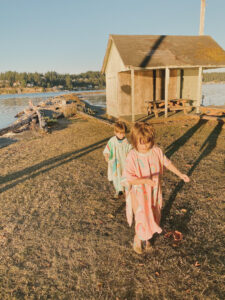 We solved a little mystery at the DeMolay Sandspit this week. Keep reading to find out just what the heck this boarded-up building is and what I found inside it 👀.

Here we are at Bella Bella Beach, a new-to-us spot on Fox Island, about an hour south of Seattle. The 3.5-acre nature preserve is officially called the Tacoma DeMolay Sandspit, but the locals here named it after the road it’s on. Does telling you this make us locals yet? 😉

The site was acquired by the parks dept for public use in 2010. It’s kid-friendly with one of the few sandy beaches in the area, picnic tables, and critters to scout at low tide (the rule here is don’t take home any shells, animals, or driftwood!). There’s also lots of parking, with about five spots along the fenceline plus a large dirt lot up around the corner. 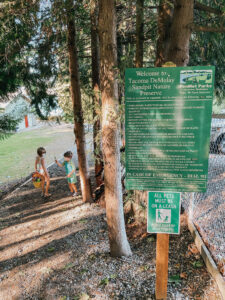 Located at 55 Bella Bella Drive, the sandspit’s origins date back to three separate parcels handed down or sold to private parties over the years. In the centuries before that, the land was home to Native American feasts and ceremonies.

In the 1930s, which I find to be the most interesting tidbit, one of the private landowners allowed the Tacoma chapter of the Masonic DeMolay boys club to use the sandspit for cookouts and leadership outings. And the tradition stuck.

As such, I got to research a little about the DeMolay for this post, having never heard of it before. Turns out, it’s an exclusive membership-based fraternity for young men aged 12 to 21, with more than 1,000 chapters worldwide and fancy alumni including Walt Disney, actor John Wayne, and broadcast journalist Walter Cronkite.

As soon as you get down to the water, this faded (and unfortunately boarded up and locked) smaller building overlooking the picnic area catches your eye. With its mossy rooftop and adorable porch, it seemed too small to be an old house. So what was it?! I immediately needed to know more. On city maps, it’s marked with a generic “picnic shelter/storage” description.  But because I love me a good architecture mystery (there’s even one in my novel!), I emailed that very question to a local historian asking about its beginnings. 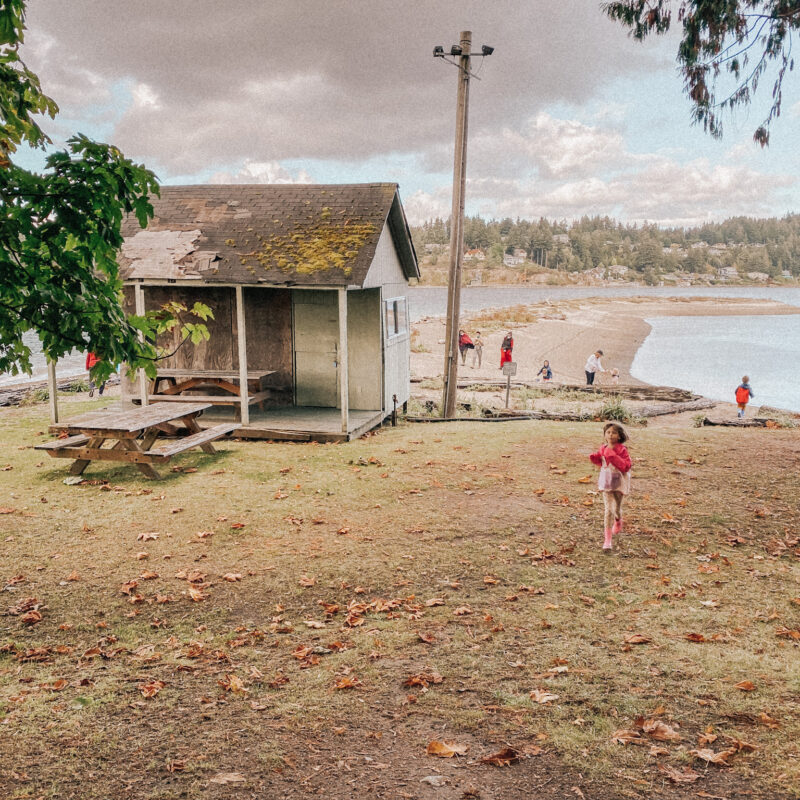 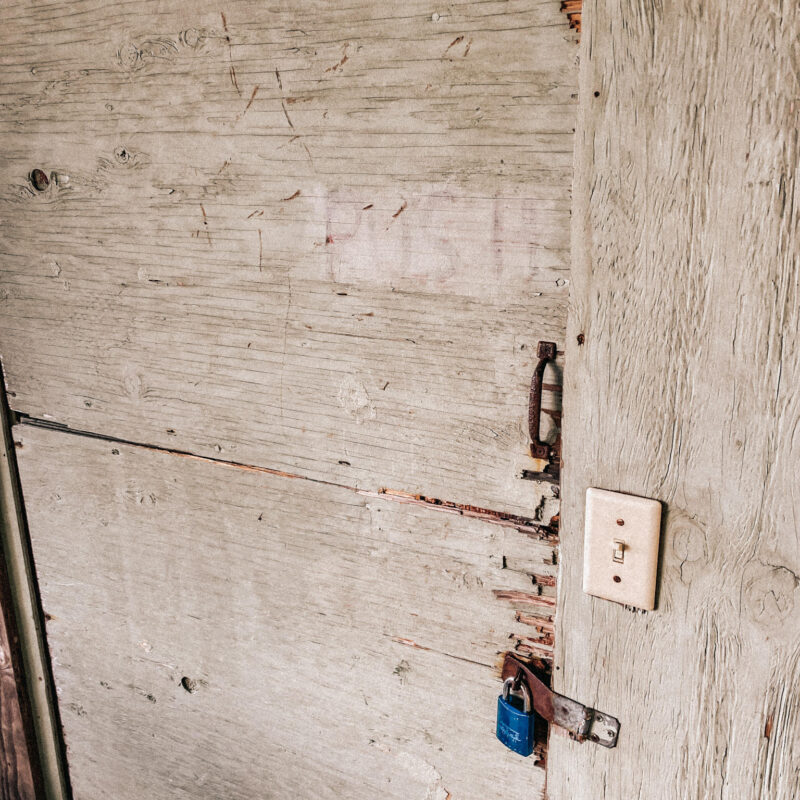 “… used by the Demolay organization during their summer camps, for cooking and distribution of meals and snacks.”

So there you have it, the mysteriously quaint cottage is  …. a former snack shack! What good times it must’ve seen.

The other mystery building on site is near the middle of the property, away from the coastline.

In the 1960s, the Tacoma DeMolay built this wood-slatted clubhouse, which still stands today on the grassy hill between the beach and the parking lot.  Back in the day, it was affectionately known as the “Calligan Castle.” How cool is that?? I don’t know who or what a Calligan is … but now I want to! The kids and I walked right past it because I thought it was one of those larger park restrooms like the state parks have. But then after I realized what it really was, I went back to take some photos of it.

Being the nosey person I am, I pushed my phone against the first window to cut back on shadows and glare and got a peek at the interior! It looks like a venue to make summer camp art, don’t you think? It could be. But it’s all locked up for now. 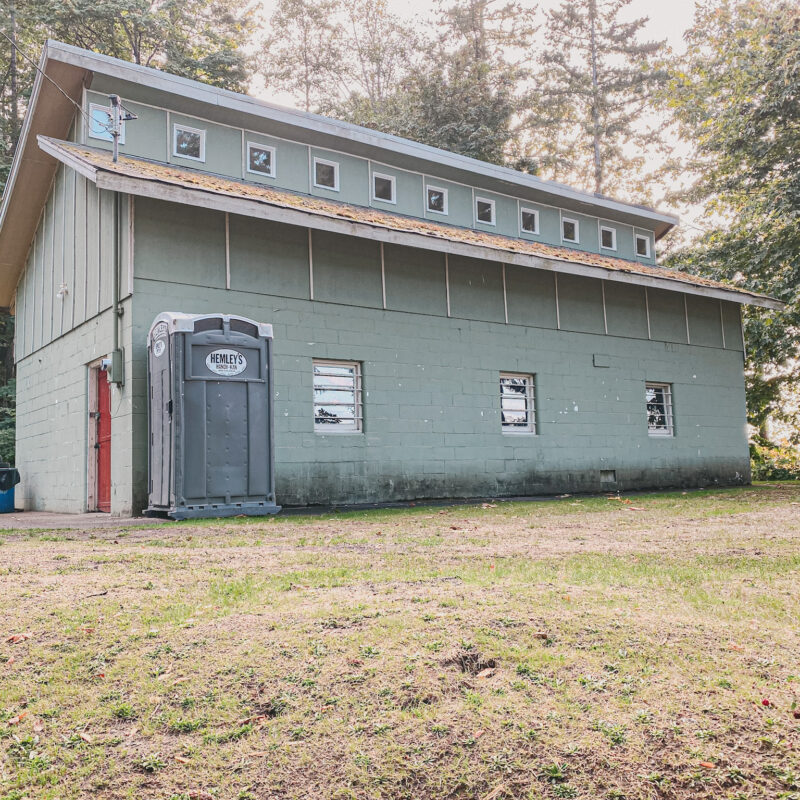 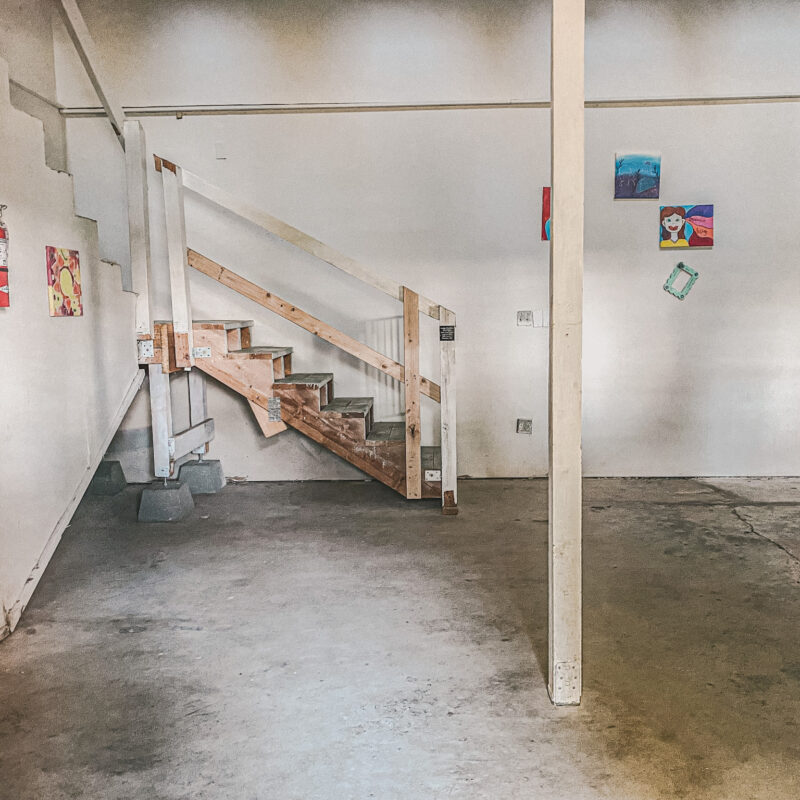 “But wait, Tonya. The Calligan Castle is cool and all – but what’s INSIDE the former snack shack??”

You’re right. I totally left you hanging there. Was it a body? Hidden bags of money? Relics of years past? The mystery of what was inside the snack shack had me hooked, too.

When I was there, you bet I walked right on over to the grassy/sandy spot where the shack resides to investigate. The ground slopes down at the base of the building, so average-sized folks like me (I’m 5’6″) can’t see inside its little window without a boost. So naturally, I did what any normal person would do and stood on my tippy toes with my phone stretched over my head and pushed against the window again to snap some pics to find out.

To be honest, I was nervous to look at my phone screen for the big reveal.

Turns out … it wasn’t a body. Although I was fully prepared for such a sighting (kinda, lol). Thankfully, the building only enclosed … kayaks! Red ones and blue ones and paddles and vests. The first image is the view through a crack in the building’s boards.  I don’t know who these kayaks belong to. But if I owned them, I’d put a plastic Halloween skeleton in one to freak out looky-loos like me! 😀 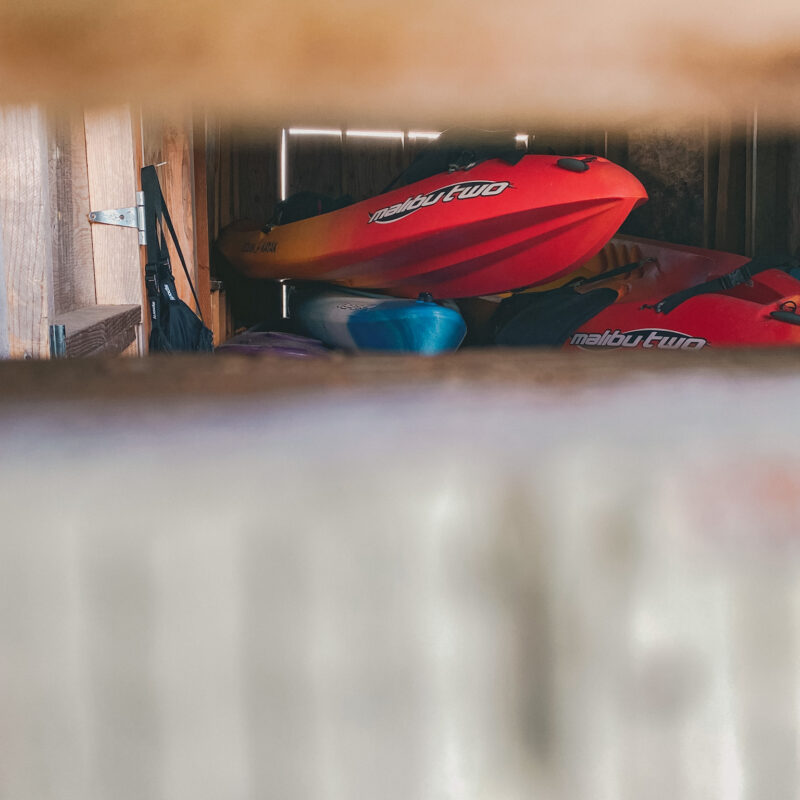 view between the slats 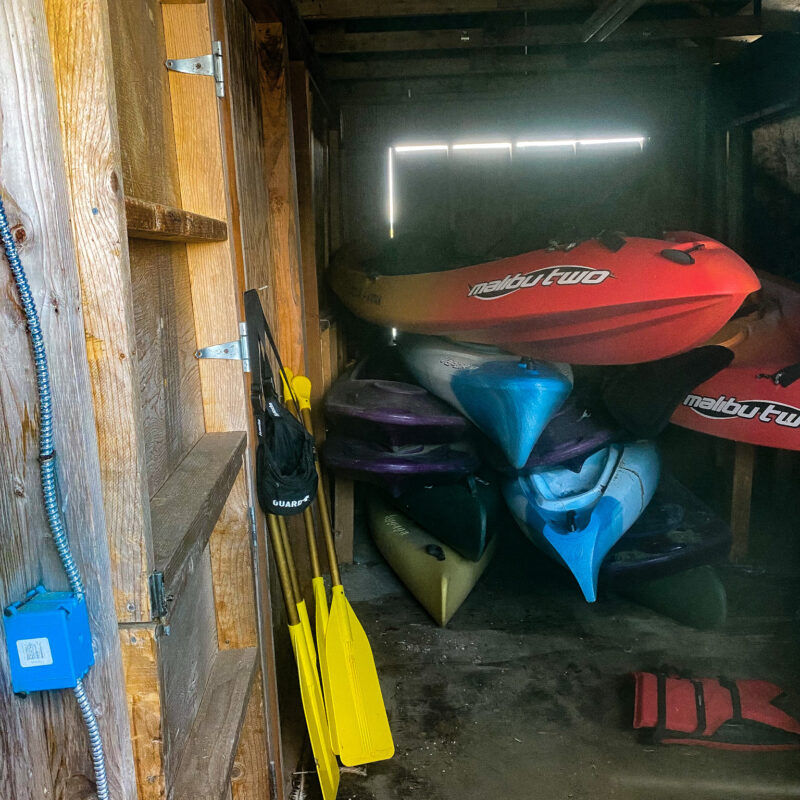 view with phone pushed against the window

Here are a few more looks at the outside of the snack shack one more time, just because it’s a beautiful mystery-building to photograph: 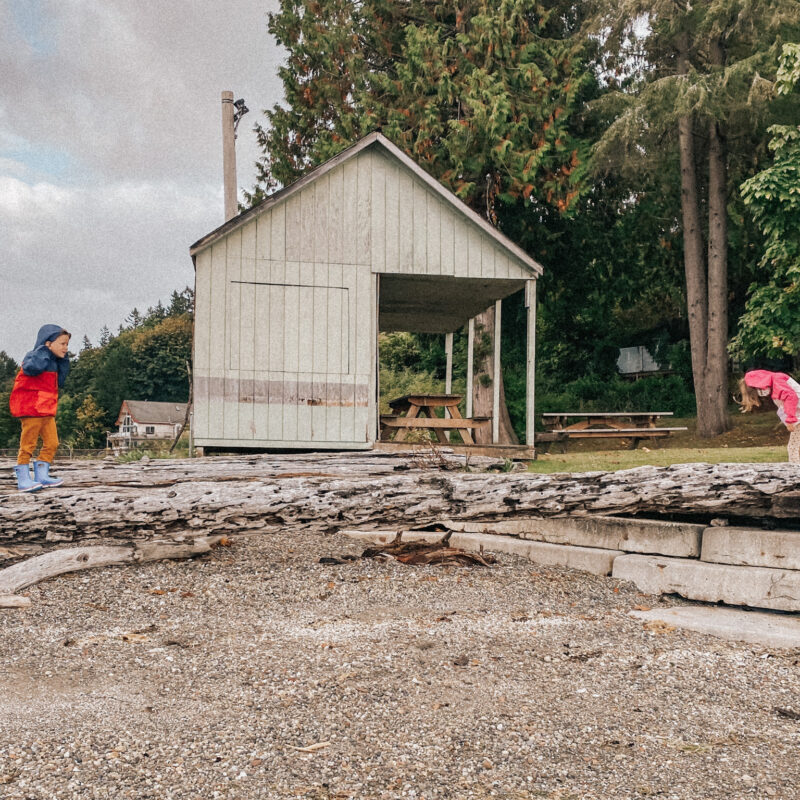 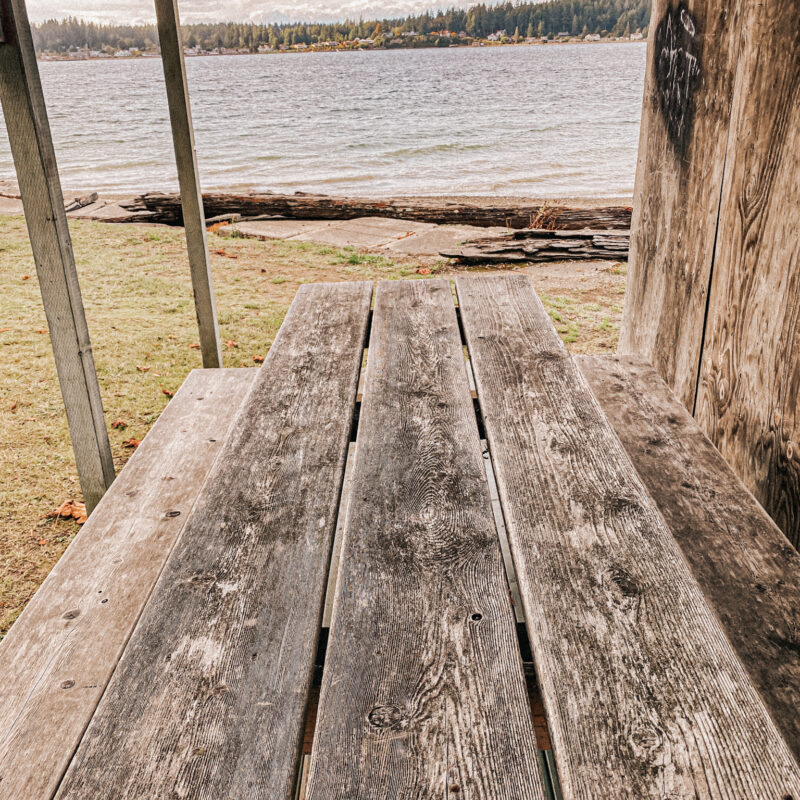 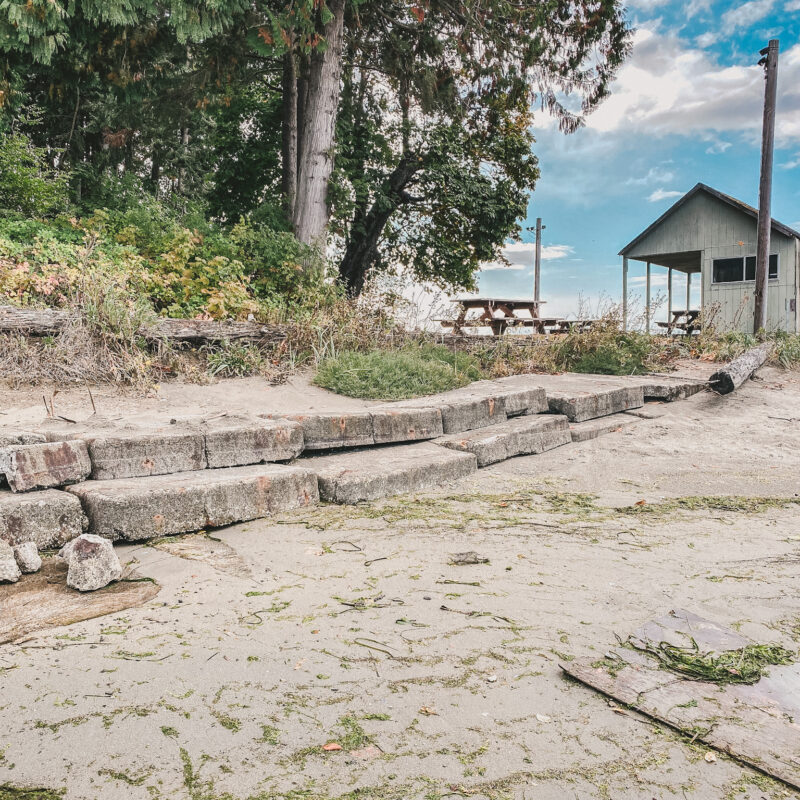 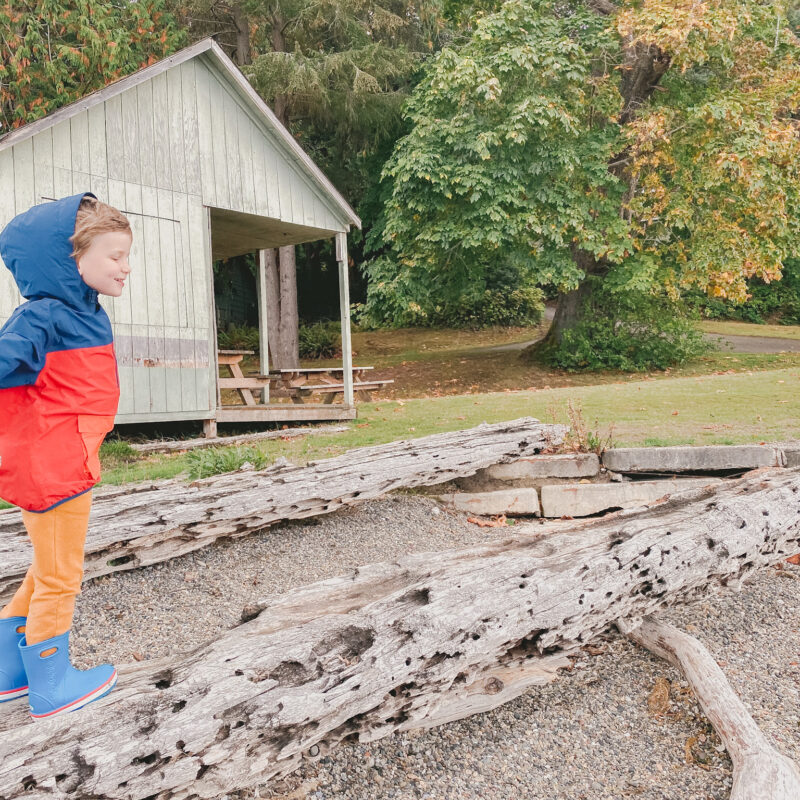 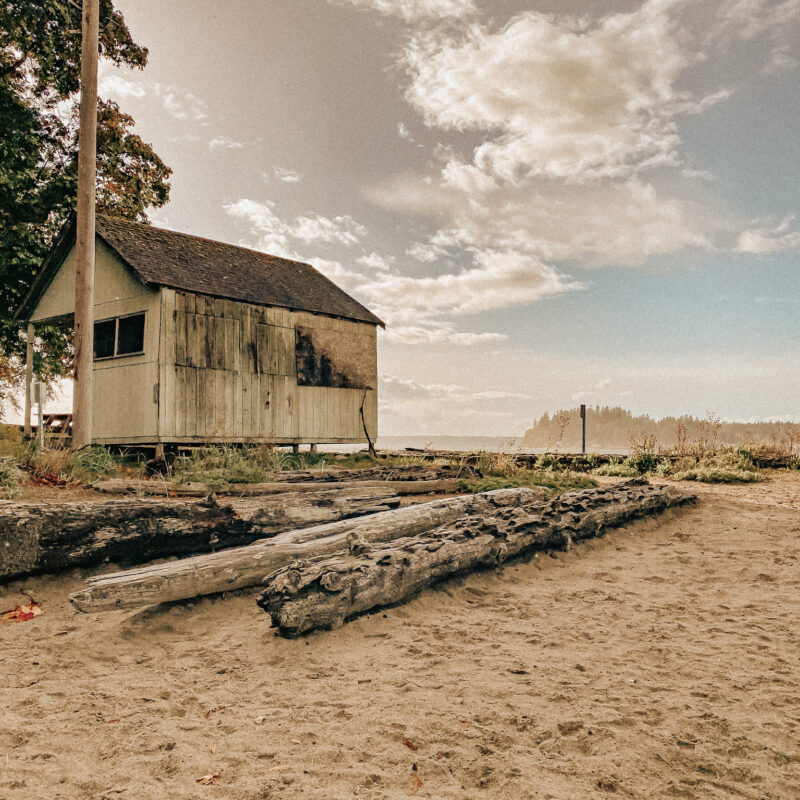 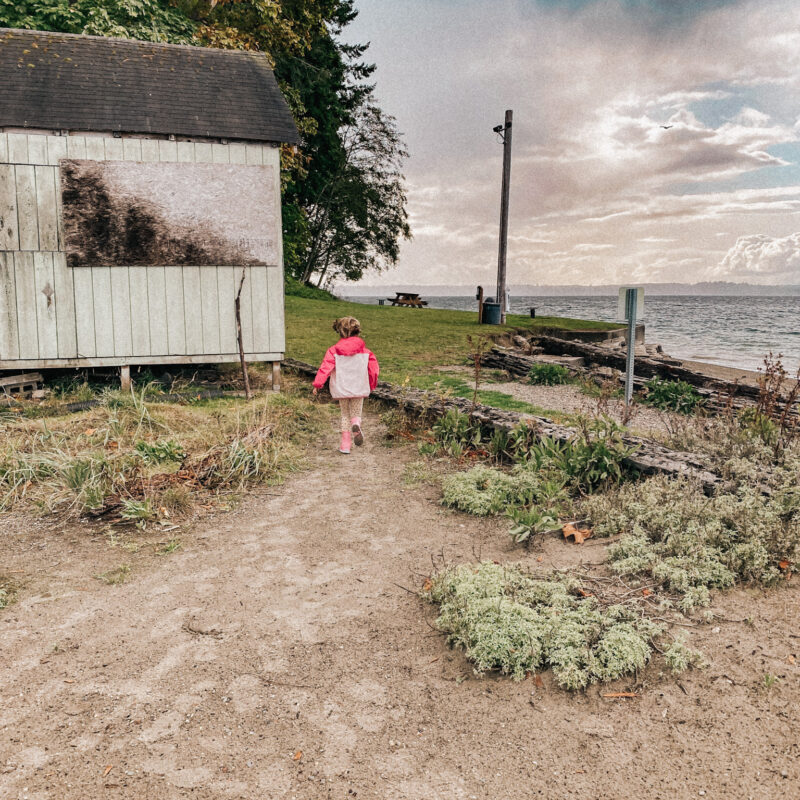